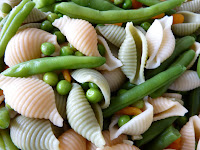 I have started so many posts and not finished them: some serious, some (perhaps) funny. I just don't have the energy right now. Perhaps I will work on them this coming week: don't be surprised to see posts popping up that appear to be old. So here's what I made for lunch on Monday.

I used to own and run two restaurants that primarily focussed on salads, potatoes and other healthy foods. This resembles the primary salad we made and I had forgotten how much I missed eating it several times a week (I had it every day for the week). We served it on a bed of lettuce, but here I served it by itself.

This was all done by eye, but the gist is:
make pasta (according to the instructions), either shells or spirals.
(In my place, we would have several stockpots of boiling water going at once, but here in the house, I cheated by adding the vegetables themselves to the boiling water so I didn't need to blanch them and add them later.)
cook vegetables al dente (always carrots -which need the longest cooking time, green beans, and peas, which use the shortest. Also good with asparagus, broccoli, and snow peas.
Add the vegetables at the time which will allow them to be finished cooking at the same time. To make it even easier, use good frozen vegetables. Just make certain not to overcook and to chill and drain as rapidly as possible. (Of course, fresh tastes better and it's easier if you have a kitchen machine.)

Important: drain and run under cold water, while stirring the mixture to allow it to get as cold as possible, as fast as possible. You can also plunge into an ice bath, or have done so with the vegetables before adding them to already drained pasta.

Makes a cool, crisp and refreshing salad that I usually have with fat-free Catalina (if I have it) or a simple Italian vinaigrette.
Posted by G in Berlin at 6/13/2009 06:13:00 PM

Looks simple & especially delicious for the upcoming summer days! Thanks for sharing!

Yum! We love pasta salad around our house too and it's so flexible, just throw in whatever you have and it's always delicous.

Hope you'll be blessed with a bit more energy soon - believe me, I know that feeling well.

Thanks for stopping by, Isabella. Can you promise me that we will have warmer days? I'm starting to despair with the daily rains after the beautiful spring.
Christina: looking forward to seeing you- are you enjoying summer or overrun?

You owned a restaurant? That is so totally cool, esp the focus on vegetables. This ties in nicely with my post on eating less meat and I am going to try this recipe next week!! (gotta shop first)