What I haven't been blogging about.

It's been a busy and chaotic few weeks.
It started with Thing2 coming home from school with what looked like a scrape on her arm. By bath time that night the "scrape" had resolved to teeth marks. What concerned us, above and beyond the actual bite, was that I had not been called and told about it. 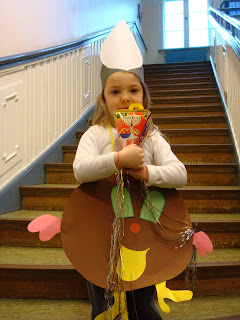 When we discussed the situation by phone with her teachers and the school director, we felt that the situation was considered seriusly. Then we had two Hanukah parties, on separate days. Both of those required me going by U-bahn and bus to the kita and back, a total journey time of about 90 minutes. That was a bit exhausting, what with trying to shop around them, but it was fun.

Then Thing2 came home with another "scrape", this one on her back. She was bitten through her turtleneck and undershirt. Once again, I had not been called.

I was pretty unhappy.

The German called and spoke to the director and I wasn't happy with her response. Then I spoke with her and since her native language is not English (although not German) and my German is shreklich, we had an unsatisfactory communication with me using my worterbuch quite a bit.

Afterward, the German and I had unsatisfactory communications, then I called the external director of the school and wound up waiting quite a while to receive a call back, which resulted in another call back, and so on. The Chef and I agreed that the lack of communication was a big problem, that more needed to be done to protect Thing2, and we left it there.

Then I spoke to the mother of the child who had bitten Thing2, who stated that although her son had bitter her the first time, another child had bitten her the second. When I inquired as to how she could know that, as I had been informed differently. she told me that the School Director had so informed her. "What, without informing me?" I thought. Another communication problem. Other child's mom didn't seem very considered, so I explained to her that the savagery of the bite was quite terrible. She aid that she "was working on it" but since that particular child had bitten another of her children (also in the back, also through layers of clothing- strange that) the day before, it didn't seem to be successful. It seems the onus of protection will be on the teachers.

In between the bites we had an elternabend, where the bite was a major object of concern because the German and I were one of two sets of parents that showed up. The biter's parents were not amongst us. We also discovered that the biter had bitten another child as well and we discovered that the following Monday Thing2's primary teacher would shift to Thing1's class as a helper and another teacher would start. That was a bit short term and surprising (we will see the reason in a while, I would guess).

In addition, we were appointed "Class Parents", as no one else bothered. Weeks later I still have not been given everyone's name and contact information. Most parents have not paid into the class kasse and although there was a separate collection for Holiday gifts, we paid for 70% of the agreed upon expense (and a bit more, as we felt it was not enough) and expect to not be reimbursed. Ah well. Welcome to Germany.

As the topper to this crazy few weeks, both girls have been ill. First Thing1 was out of school with a high fever, then Thing2 joined her. The German was working late and long, I had no chance to do any type of shopping, let alone holiday shopping. On last weekend, the German went west to pick up the car we had looked up the week before and I also got no time to go shopping. A friend had a baby, I haven't even visited her yet, I feel terrible about it, but I was sick myself and didn't want to run the risk of carrying anyone's germs to her, and then we ran into prior commitments.

The German went on holiday after work Thursday, just in time for me to run out and pick up some chocolates to add to the cards (and cash) that we gave to all the teachers on Friday. We drove over (!!!) on Friday morning to let the girls (still on medication, but recovering) say "Happy Hanukah" to their frinds and teachers before the two week vacation. I also go the chance to speak to the new boy in Thing1's class who has been mean to her (I can't tell why- perhaps he likes her), which embarassed him but which the teacher was glad to hear about and will follow up on.

I'm so glad that we have a car. Although I have in many ways enjoyed being without one and the cost of busing is a bit less (and the ease of putting them on the bus in my pj's has been wonderful), having a car will allow me to interact with the school, the girls and the other parents in a way that I haven't been able to do since the summer, when I took the girls there by foot (but without the pain of the bone spurs).

We are also looking forward to being able to take local vacations in the spring, summer and fall through the kind offices of the in-laws and their trailer.

Whew. More tomorrow now the dry spell is broken and the fourth load of laundry is in, and the beds have been changed, the mess tidied and the clutter contained. I can't even imagine how women an home-school and keep their lives under control: 11 days with the kids home and the husband late and I have been totally frazzled.

I look forward to vacation, although we expect to be busy: moving our remaining "stuff" to Berlin, taking a quick trip to Amsterdam, spending time with the in-laws (which I do enjoy, although I find trying to speak German exhausting), visiting a very dear friend by Muenster (and spending New Year's with them), going shopping without the kids(yeah!) but with the German(double yeah!), perhaps even getting some museum hopping going here in Berlin.
Posted by G in Berlin at 12/21/2008 09:03:00 PM

Ouch! The biter must be stopped as soon as possible. That's horrible that you were not informed by the school personnel. Hope it works out well.

Sorry to hear about the biting. That is extremely distressing, and made worse because the school is not communicating properly.

In my experience, parents' evenings are usually very well-attended, since people always have something to complain about. It seems odd to me that very few people turned up to yours.

Wishing you a happy holiday season, health in your family and much fun together.

I'm so sorry to hear about the biting! I can't believe that the school isn't doing more to protect your kids. Heck it sounds like who they're actually protecting is the biters themselves. Grrrrr I hoep you can get this resolved. :(

Oh my word - biting! Hope it all gets resolved satisfactorily.

I just wanted to wish you and your family a Happy Hanukah and a great new year.

That's a bit extreme. Most boys I knew who had violent affections expressed them with hair pulling and teasing.

In the future, you should reference this little man as Herr Dahmer.

For the biter, I suggest one of two solutions: hold him down and let thing1 (or was it 2?) pull his teeth with a pair of pliars, or strap a muzzle over his face like that one on Hannibal in Silence of the Lambs. That'll learn him, durn him!