My daughter is an English mother-tongue speaker! 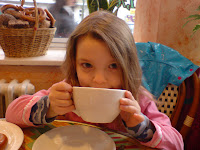 It's strange to think that while I was posting every day last month I didn't have time to write about all the things that were happening. Time just seems to fly. Back on the 25th we had our English test at the "other International School".

What a difference. Thing1 was so fussy and unhappy in the morning that we almost canceled, but I just couldn't take another week of keeping her out of school and forcing her to speak in English with me, watch only English DVDs and TV (hard to do with power cable after power cable blowing out on me).

She settled down when we (the German stayed home for the appointment) walked to the U-Bahn and then she skipped through the snow--- she really loves spending time with us and without Thing2. We were early for the test and ran up and down the halls a bit: the office staff was extremely friendly. We were the first test of the day and the two testers, also British, brought all three of us into the room. One spoke to us about our background while the other spoke to Thing1, showing her a class pet and a photobook about its adventures and just making her feel secure and comfortable. This is opposed to the other school, where the woman took my daughter away without even speaking to us (except to snap that I was not allowed to follow). I asked the teacher not to start speaking to her in German, explaining that once Thing1 thinks German is the language to speak to someone that she won't revert to English and the teacher laughed and said that the test was for English: they wouldn't be speaking any German.

When we left the room, Thing1 was already engaged in an animated conversation with the young women. She apparently had so much fun that they needed to call us in to inveigle her out while they discussed her results. After they called us back in, the lead teacher told us that Thing1 had PASSED! Yeah!

She carefully explained that this does not ensure an admittance and talked a bit about the process and then we said good-bye: it was a bit difficult getting Thing1 to relinquish the stuffed rabbit (probably reminds her of her of her own stuffed rabbit lovey) but then we wandered a bit around the school, showing Thing1 the play area and then out. Across the street was a charming and traditional shop which sells penny (and plus) candy, fresh baked goods, etc, so we stopped in. The German and Thing1 had hot cocoa and I had a milchkaffee. (It turned out to be an early school closing day- teacher enrichment- and there was a constant and adorable stream of children and parents coming in and getting pastry and candy and leaving.)

We were all very happy.(see photo above)

Yo! Now that's more like it! I'm so glad it was a positive experience for her this time and I really hope she does get admitted.

What a relief for you all! Hearty congratulations to little thing1, she should be proud of herself.

Congrats on that. I hope you guys keep speaking English to her at home.

Congratulations! What a relief, eh? Don't worry, once she's in school and having all her lessons in English it will quickly become her strongest language again.

I'm noticing that my sons are starting to even speak German to each other while they're playing, and they're starting to speak to me more often in German as well. (except for when I want them to, of course! ;-))

2 1/2 years ago they didn't speak a single word of German, and now because of being in a local school it's starting to take over! Kids' brains really are amazingly flexible!

Time to follow your lead and really make a point of reinforcing the English at home...

Gosh, is it really that hard to get into international school? What a nerve-wracking saga! Right now we plan for our kids to go to normal German school but speak English at home and plan to spend summers in the US. But I do have a covetous eye on Bavarian International School if we don't like the public school. . .

Thanks all- it was a huge relief!
@Honeypiehorse- Yes, it really is extremely competitive. What you don't realize is that these schools are not private schools- they are Berlin public schools, the equivalent of magnet schools in New York. Putting the girls in an international private school would be terribly simple and terribly expensive. I think elementary school is 16,000Euro and highschool equivalent somewhere around 24-29,000. Since it would not be paid for by a firm or a country, that is just out of our reach.

I am just so happy!

I'm so glad this wone worked for you! Was this the test at Charles Dickens or Nelson Mandela?
You must feel so relieved! :O) I'll keep my fingers crossed she gets in!