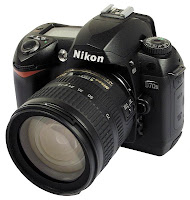 I keep on reading about other expats (and Germans) who are successful at selling things on-line in Germany and I wonder how they do it?
We have sold a few things, generally for very little, but it seems that (in Berlin at least) many Germans like to sell their used items for 95-120% of the original price, but hope to buy used items for 5-10%. This is a bit annoying. In my quest to declutter, I have been doing an awful lot of actually putting things outside with a sign saying that it's free for the taking (and it seems to get taken) or running it to libraries (books) or the recycling hof (where folks stand outside to take the electronics).
I had been trying to sell my Nikon D70s for months, priced at quite a bit below lower-level DSLRs and I just kept being spammed or having offers for ridiculously low prices. I tried to sell it for credit at a local high-end camera store and they offered me 60€ while they had the exact same camera, with a lower level lens (I was offering the whole kit) for 350€.
Posted it in Munich, had two messages within a day, first person to make appointment bought it for my requested 200€ ( a very good price, I think, for the whole kit and accessories).
The difference between Munich and Berlin.
Posted by G in Berlin at 7/04/2011 06:20:00 PM

I have still to venture into this arena. I've been putting off selling the highchair that hasn't been used in at least a year and a half. But my reluctance to have to describe it in German on German ebay is far greater than my need to sell it/need for space.

I have had no luck here in Berlin: we listed it on e-bay here (with the German writing the description) and we just got massive spam/con responses. We have sold things on kiji (owned by e-bay, but no commission) but also a high spam response. I also have a highchair in the kellar:). But there is a limit to how many cameras (especially DSLRs) that I want in the house— I want to buy a new one and I just couldn't do it without getting rid of one!

Hmm...I might be better waiting until I get back to the UK. I'm glad I read your post. Thanks!