I was certain that I would not make Tuesdays with Dorie this week. It's the week before Passover, life is crazy, and I have already removed all the chometz from the house. So there's now way that I could make a pie crust (no flour), nor did I want to make it a few days earlier (no time and didn't want to have it hanging around the house). Amy of Sing for your Supper chose Banana Cream Pie and the recipe is here.

Tonight I was looking through the TwD blogroll and started to feel bad about not being a functional part of the group, particularly as I won't be able to bake the next recipe (no flour allowed until eight days from Wednesday night, during the 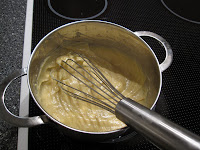 eight Paschal days). Also, I saw that some folks had made their pies as parfaits and thought: I can do that!

So I whipped out my potato starch and the other ingredients (white not brown sugar, powdered, not fresh nutmeg) and put together a half batch of the pastry cream. Because I read the P&Q, I put in 1/2 the amount of starch called for and I was also able to whip the pot off the stove almost as soon as I returned it (after tempering the mixture): it turned "solid" almost immediately and 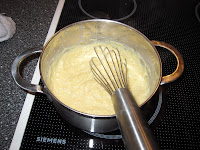 without coming to the boil. So far, great.

Then I gathered the ingredients for the topping. Because I so rarely use heavy cream, I keep H-Schlagsahne in the cupboard. I whipped it out and started beating. And beating. And beating. It didn't whip! Instead, it seemed to separate and curdle. After a while I just gave up. Luckily, I had three egg whites from the pastry cream and I beat those add, added a tbl. of powdered sugar, a teaspoon of vanilla, and then as I continued to beat, a 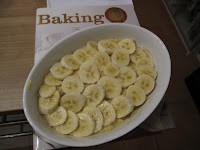 judicious dollop of Kahlua and a few more tbl. of granulated sugar.Looked great.

I spread the cream in a pastry dish, layered slice bananas on top, and attempted to pipe the meringue on top. Err. My plastic baggie didn't work very well. Threw a few more banana slices on top, sprinkled some sugar on, then put it in my 225C pre-heated oven to brown. As warned, I waited and about three minutes later it came out looking great. 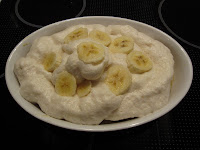 The German had two bowls full, I had a taste: the cream is too sweet for me, even though I cut back on the sugar. This seems to be a regular problem for me with Dorie's recipes and I need to more proactively reduce the sugar in her recipes. Spouse gives it two thumbs up, we will see how the girls feel tomorrow. 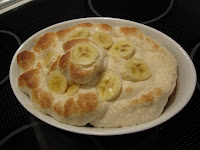 That is a very neat idea, it looks yummy!

Glad you decided to try it! Sorry you weren't a big fan.

Great idea, it looks wonderful, glad you decided to make it!

BTW, I saw your comment about not being able to participate in the next one, but there's no flour in the Chocolate Amaretti Torte! Perfect for Passover :)

It looks great! Good idea to get around making the crust.