Can it be Sunday already?

As is evidenced by my lack of blogging, I've been more chaotic and all over the place than usual.

We have had New Year's and Yom Kippur and Sukkot and a sadly great amount of time spent in synagogue was on the weekend rather than during the week. Sad because it has meant that I have spent the weekends being busy and therefore started each new week already tired. 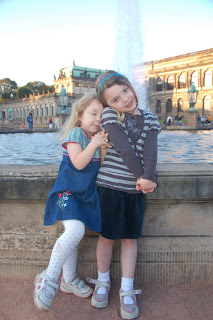 Thing1 lost an upper front tooth but has refused to allow the tooth fairy to visit and now she seems to have lost the little box she had that tooth in.

Last Friday we finally came to a decision on the move to Munich: it's really been on the burner, going back and forth, since June. The final result will be that the German will work no more than 4 days a week until January, that we will have a bit over three weeks of vacation between now and then and that after the 1st he will go to 3 days a week, which is manageable until the end of the school year. So the girls keep their friends, as do I, and all our arrangements will continue and I can start to relax: those of you have moved in Germany know just how horrifying and stressful the concept was: giving three months on this apartment and only having apartments available to view in 1, 3 months notice on utilities and gyms and ballette classes, having to uninstall and reinstall lights and renovate.... Yes, although at this point I was almost psyched at the concept of Munich I was definitely still more than unhappy with the thought of moving!
Great companionship checking out the new W on the beach:) October 2009 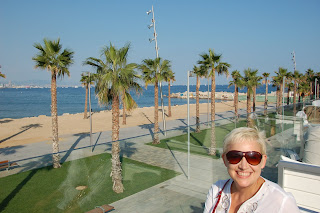 So after finding this out, I ran away from Friday to Sunday to Barcelona (as previously planned)and it was wonderful: weather, architecture, food, companionship and weather. Walked a lot and looked at things from the outside and had a great time.

Came back from low 80's to chilly and high 40s and a late end and early start to the week.

The best tuna tartare I've ever had, at the new W in

The girls were exhausted this week: Thing1 was so tired on Tuesday that when I picked her up at school she actually wept and begged me not to make her go to swimming. I'm going to guess that she must have been a little sick, although she had no fever. In any case, we stayed home and had an early night with movie. On Thursday I was called in to pick her up from school early because her remaining upper front tooth was so painful and we stayed home again. That night, her tooth came out and now she looks like the cutest little vampire in the world:). It brightened her mood. We had some negotiation over what would inveigle her to allow the tooth fairy to take her tooth and we determined "something with ponies and fairies".

Luckily, here in Germany there is no shortage of such and she wound up with the new Lillifee DVD and a Ponyfee book. Perfect for her reading age and I am finding it useful myself- now I know that I can, sortof, read in the 6-8 age group.

This week culminated with Simchat Torah and another weekend in synagogue. The girls were pretty happy with this, as there was definitely candy being tossed about. The German was a bit wobbly as l'chaim and kiddush were being made with Russian vodka!

We also made a quick run to Ikea- T1 and T2 adore going there. Another blogger mentioned that she had been there this weekend and was overwhelmed by lost and rowdy children and Germans with no idea of personal space.
I certainly agree that many Germans have no idea of personal space- I particularly loved the man who thought that stepping between my crying child and her mother and not moving was a good thing to do- while standing in line himself at the childcare area! But I have never seen/heard announcements for more than lost child or two, because the main reason that folks go to Ikea with their children!) is to take advantage of the free supervised spielplatz. Often we go have a coffee and chat for that hour, although this time we picked up another Benno (in schwarz-braun) for downstairs. Then we all went up and ate salmon and boiled potatoes and frites. That after a lunch of grilled steak and mashed potatoes. T1 said it was "the bestest day".

Moving is always so stressful. I can't imagine having to give so much notice to utilities on top of everything else. Three months seems like such a long time for notice on gyms and classes. Good luck!! :)

Wow, exciting (and seems like the best option) about the move. Keep us updated!... southern (ish) germany is also nice! (I'm near stuttgart)